Richard purchased his first boat in 2016, a SeaRay 215 with a Mercruiser petrol engine, and quickly realised that the marine industry was decades behind the automotive industry in terms of engine control and emission requirements. Understanding that it is hard to get petrol fuel in UK waters he decided to source a diesel sports cruiser in order to start the development of Unichip Marine.

Once Richard had his new craft, he was left extremely disappointed with the performance. Being a heavy boat and a single engine, it wasn’t as fast as he expected. Very quickly, Richard had fitted and tuned his first unit to the Mercruiser diesel engine. The boat performed great, easy to get on plane, backing out of the throttle very quickly to settle down to a comfortable cruise.

Achieving such great results, Richard discussed his project with various professionals in the marine industry. They informed Richard how widespread engine problems are with pleasure craft, with many boat owners concerned with the reliability of their expensive engines. Richard came to appreciate that most problems arise from faulty wiring and gauges at the helm, caused by corrosion and poor connections. This in turn would lead to overheating of the engine, and in the end failure.

The scope of the project turned from making a performance system to a safer system. With today’s technology, making better performance from engines is easy, as is safer performance. Ensuring safe performance when influenced by an outside source is the challenge, but this is what Richard lives for!

Working with many endurance 24-hour race car teams, 80% of the success is down to reliability and being able to still turn the laps of a race circuit safely when something goes wrong. We can achieve this with the modern electronics found in all passenger vehicles. So much so, that you rarely know it is happening.

Modern engine control systems monitor many parameters on the engine giving them the ability to still perform under a fault condition. However, this level of technology is extremely basic on older boat engines. As an example, you will see a 50% drop in engine performance if the engine coolant temperature sensor fails. Due to the technology used on the older craft there are many system checks that are left to the marine engineer to resolve often resulting in large diagnostic repair bills. There is also the fact that most marine engineers are trained and experienced on modern systems from the last decade, not with the older systems that many of us still use.

Every boat operator would like to get on plane a little quicker, and the Unichip Marine will help get you there. 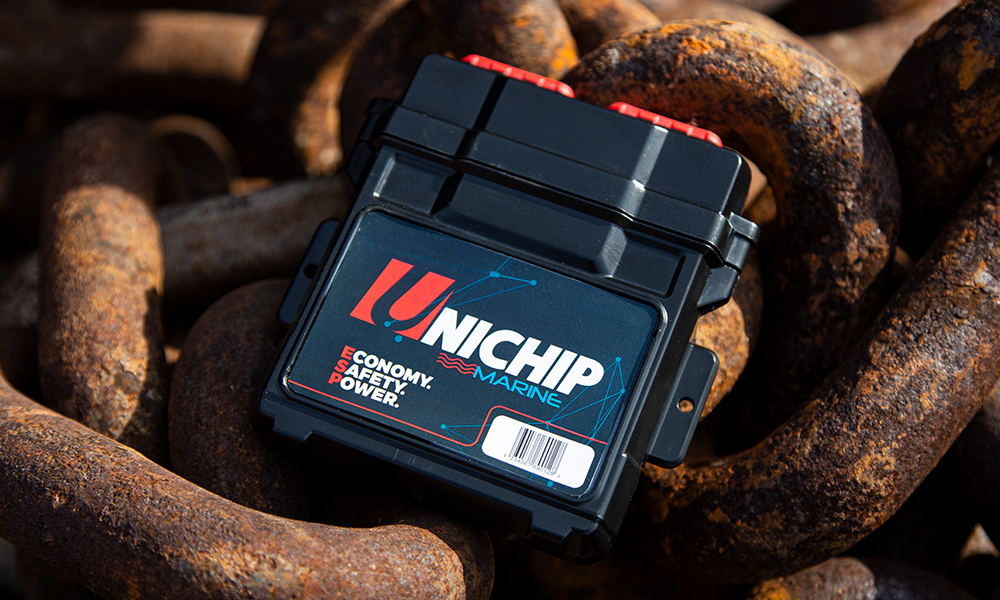 During the development on the Unichip Marine system Richard quickly realised that in order for these engines to perform well, they require a good fuel supply, however this can be a challenge due to the marine environment. So the decision was taken to add fuel pressure sensors to the system. Many older craft do not use this despite it being a valuable diagnostic aid and early warning system of a potential problem.

Richard also believes that ‘if it’s there, use it’. So when he had to purchase an up to date chartplotter/MFD unit, he quickly found out that there is a massive hole in the market for a simple plug in system to communicate engine data to the chart plotter. It was pointless paying all that money to have all these great features and not use them. What was needed was a system that made it simple for the end customer to utilise them.

Unichip Marine has quickly evolved from a simple performance enhancement unit to a fully functioning control unit that will display engine data and alarm warnings on the MFD and only give added performance if it is safe to do so. It is a real essential, for the medium size sports cruiser which often needs a little upgrade in terms of performance, reliability and electronics.

Have any more questions about fitting Unichip Marine on your Mercruiser D-Tronic, Kad300 and Volvo Penta engine?

Get in touch to find out more.

Your E-mail has been sent. We will be in contact with you soon.

Please refresh the page and re-submit the form.

SORRY
Your content caused an error and your email has not been sent.
Please remove any unusual characters and try again